The Flow Cytometry & Cell Sorting Core (FCCSC) at the Roger Williams Hospital is comprised of an array of sophisticated instrumentation to empower the researcher in the analysis and isolation of cell subpopulations.

The FCCSC houses a Beckman Coulter Modular Flow (MoFlo) high-speed cell sorter within the MoFlo Laboratory on the ground level of the Roger Williams Hospital.  This instrument is operated full-time by John Morgan, Ph.D.  Dr. Morgan has more than 25 years of “hands-on” research laboratory experience in cellular and molecular biology, and he is DAKO-certified for the routine operation and maintenance of the MoFlo sorter.

The MoFlo cell sorter can easily and rapidly sort with a very high degree of purity (>99%) at sorting speeds of up to 70,000 events per second, depending on the size of the sort product. The sorter is equipped with four lasers: a Coherent Innova 90-C Argon ion 350nm (UV) laser, a Spectraphysics Argon ion 488nm (blue) laser, a Coherent Diode 405nm (violet) laser, and a Melles-Griot 633nm (red) Helium-Neon laser.   This configuration provides the capability of detecting up to eight colors simultaneously using the following example fluorochromes: FITC, PE, PeCy5, PeCy7, BUV, BV421, BV510, and APC.

The sorter is capable of simultaneously “bulk” sorting one, two, three, or four populations into test tubes of varying sizes (ranging from 1.5mL Eppendorf tubes to 50mL tubes). Additionally, the instrument is equipped with a CyClone Automated Cell Deposition Unit, which allows for rapid and accurate cell deposition into various multi-well plate formats (single cell to multiple cells per well).

As an added safety feature, the sorter is housed within a custom-built laminar-flow hood (Walker Safety Cabinets), which provides a sterile environment for all sorts, protecting both the operator and the biological samples. This cabinet, which completely encloses the sorter, has been tested to NSF-49 International standards and provides Biosafety Level II containment. The addition of this cabinet allows us to sort and analyze potentially harmful samples (e.g., virally-transduced samples and samples potentially containing pathogens) without risk to the operator, laboratory personnel or the biological sample. 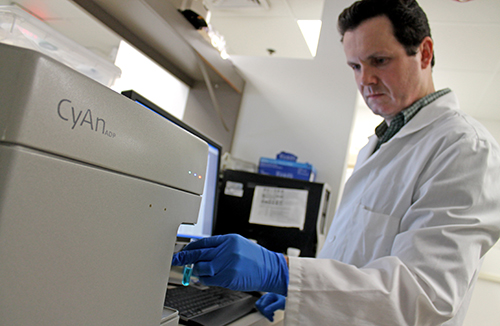 The CyAn ADP flow cytometer is located within a laboratory space on the ground floor of the Roger Williams Hospital. The CyAn cytometer is configured with three lasers (blue 488nm, red 642nm and violet 405nm), and has the capability to simultaneously detect up to 9 different fluorophores. Example fluorophores detectable are outlined below:

The Flow Cytometry & Cell Sorting Core also has available for using an AutoMACS Pro magnetic separator (Miltenyi). The AutoMACS is located within a laboratory space on the ground floor of the Roger Williams Hospital. The AutoMACS Separator is an automated machine that allows for the enrichment of specific cellular populations prior to downstream applications, such as cell sorting. This procedure efficiently “de-bulks” large samples which would otherwise require a significantly longer time for isolation by FACS alone.

An analysis workstation computer, located within a laboratory space on the second floor of the Roger Williams Hospital, is available. This computer (a Dell XDP desktop configuration equipped with 6 Gb memory) allows investigators to analyze their flow cytometry data with either the Summit or the FACSDiva software programs independent of the CyAn and LSRII cytometers. This separate analysis workstation enables data analysis to occur concurrently with sample acquisition by other investigators using either of the flow cytometers.