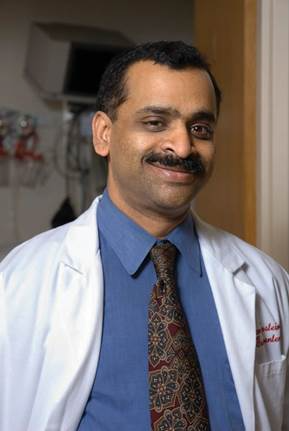 (Providence, RI) Ponnandai S. Somasundar MD, MPH, FACS, Associate Professor of Surgery Boston University, has been named Chief of the Division of Surgical Oncology, Department of Surgery, at Roger Williams Medical Center.  The announcement was made by N. Joseph Espat, MD, MS, FACS, Chair of the Department of Surgery.

Dr. Somasundar completed his general surgical training at the West Virginia University Department of Surgery serving as Chief Resident. Subsequently, he completed a research fellowship in molecular signaling pathways in cancer from West Virginia University. He rose to the rank of Assistant Professor at the same institution before completing a Fellowship in surgical oncology at Roger Williams Medical Center in 2007. Dr. Somasundar subsequently completed a Master's in Public Health from the University of Massachusetts Amherst in 2011.

Dr. Somasundar has been an active member of the Roger Williams medical staff since 2007 and was promoted to the rank of Associate Professor of Surgery at Boston University School of Medicine in 2013. He has held numerous prestigious positions both locally and nationally, including President of the RWMC medical staff, chair of the bylaws committee, board member for the advisory board of Roger Williams Medical Center, and several peer-reviewed editorial boards. He is the author of over 100 published peer review articles, abstracts, and chapters and is regarded as an authority on the topic of geriatric oncology.